Hard to Keep Up with This Immigrant! 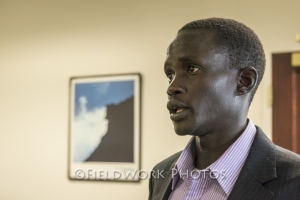 Remember the 2012 Olympics? It was big news in New Hampshire because former Concord High School student and distance runner, Guor Miading Miaker, was competing in the marathon. His story had an unusual twist back then, and continues today with more twists and turns.

Gour (who also uses the last name Marial) escaped to New Hampshire as a teenager in 2001 from war-torn Sudan. More than two dozen of his family members had died during the grueling Sudanese civil war; he himself was kidnapped, assaulted and forced into slavery. Finally he was able to get to the United States. In 2011 South Sudan declared independence from Sudan becoming the world’s newest country.

After resettling in New Hampshire, Guor excelled in distance running at Concord High, winning national championships and a college scholarship. In his first-ever marathon, he qualified for the 2012 Olympics in London – but there was a problem. 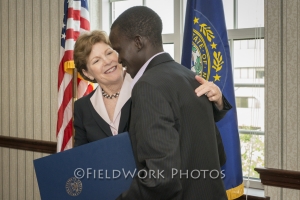 Gour had no country affiliation for the Olympics. South Sudan was too new a country with no Olympic team; he wouldn’t run for Sudan after such war atrocities; and he couldn’t run with the U.S. team because he was not yet a citizen. Nevertheless, with help from many, including Senator Jeanne Shaheen, the IOC gave Gour the rare status to compete as an Independent Olympic Athlete.

On a predawn Sunday morning in August 2012, I joined Gour’s South Sudanese friends and relatives in a crowded Manchester apartment to watch the marathon live from London. They cheered and ululated exuberantly each time his neon-green running shoes appeared on the TV. That he finished 47th was irrelevant. What mattered was that he ran in honor of their new homeland. Read more.

Fast forward to this year – more obstacles appeared in the path of Guor competing for his country. South Sudan had to apply for Olympic recognition in the 2016 summer Olympics in Brazil. Then last January Guor received a scholarship from the IOC to train for the 2016 games, but the South Sudan Athletic Federation demanded that the money come to them, otherwise they would not let him be part of their team. Fortunately the IOC and others stepped in, persuading South Sudan to reverse their ultimatum. Read more.

And here’s the latest: just last week, South Sudan’s application was finally accepted by the IOC. It was an emotional acceptance ceremony. This new status bolsters a war-weary county, perhaps even bringing a sense of unity and peace. Read more.

South Sudan will send a small team, only distance runners, including Guor who now trains in Kenya. It will finally give him the chance to run for his homeland. “This is a dream come true,” he told The Guardian. “There will be nothing better than competing in Rio under the South Sudanese flag.”

So, be sure to watch the 2016 Olympics and cheer for this speedy, former New Hampshire immigrant.