Srebrenica: “A time to bury our dearest”

New Hampshire is home to several hundred Bosnians who started resettling here as refugees in 1993. This year, on Saturday, July 11, The Bosnian community and their friends, with support from the Association of Bosniaks of New Hampshire, gathered to remember a 20-year anniversary of unspeakable horror.

From the air it looked like a large white flower, but on the grass in Derryfield Park in Manchester it was a pattern of small white flags in neat rows. There were 8,372 flags, one side with the symbol of the Bosnian flag and the other side with a person’s name. The flags honored 8,372 Muslim people massacred in the three-day genocide in and around the small mountain town of Srebrenica that began on July 11, 1995. 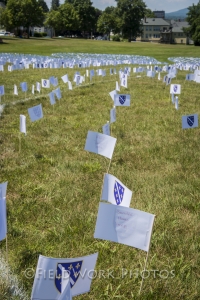 During the Bosnian war, the United Nations had designated Srebrenica as a “UN safe area.” The town’s population swelled as people desperately sought refuge from the war. On that July day 20 years ago, the Serbian military swept in, massacring Muslim men and boys as the outnumbered UN troops looked on helplessly. Many who escaped into the woods were hunted down and killed.

Two UN courts have ruled the Srebrenica massacre as genocide, the worst in Europe since the Holocaust. Although the Serbian governmental leaders and the military were directly blamed, the United Nations has also acknowledged its own negligence and the failure of the international community to protect the Bosnian people.

Twenty years later in Derryfield Park, children ran about on the grass in the warm afternoon sun as adults gathered near the rows of flags. In sharp contrast to the tranquil scene, voices rang out as young adults, one by one, read horrifying stories from NH survivors of that day.

Unspeakable accounts were spoken. The personal memories were hard to hear and even harder yet to imagine how anyone could endure from such cruelty. As one person recounted, “it was a time to bury our dearest.”

I noticed a young boy, about 12, sitting on the grass with his mother near one of the flags. He pulled the flag out of the ground and pressed the side with a name against his heart. He glanced up at his mother. She leaned over and gave him a kiss on his forehead.

I am grateful that New Hampshire provides a safe home for Muslim families from Bosnia. 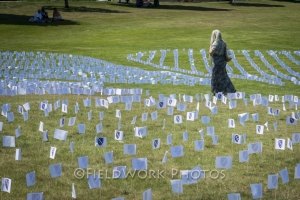