Earlier this month (6/3/15) the NH Senate passed a resolution (NH SCR 1), requesting the U.S. Government to work to resolve the Bhutanese refugee crisis, repatriate their refugees, and promote human rights in that country.

Why, you ask, are NH senators concerned about refuges in this small South Asian country 7,500 miles away?

The Bhutanese community is the largest ethnic group of refugees currently in New Hampshire, 2,091 people resettled here between 2008-2014. The Senate resolution was the result efforts by the NH-based nonprofit, International Campaign for Human Rights in Bhutan, and Manchester resident, Suraj Budathoki, Executive Director. That Senate resolution recognizes the contributions of Bhutanese in New Hampshire.

You may have seen some of our Bhutanese neighbors around town – women in colorful saris, men wearing small patterned hats (topis), or their children in our schools. In the last two years, two Concord High School seniors from Bhutanese refugee families have won the highly competitive Bill and Melinda Gates Millennium Scholars Award with college scholarships.

Although having Bhutanese ethnicity, the families had lived some 25 years in refugee camps in Nepal. Starting in the 1980s, the royal government of Bhutan dictated that southern Bhutanese, whose ancestral roots were Nepali, should denounce their customs and strictly follow the traditions of the northern Bhutanese. Protests and violence erupted during the 1990s. The government militia closed the southern schools, burned down homes, attacked women, and killed protesters. The southern people fled to Nepal where their numbers in the squalid refugee camps swelled to more than 107.000 by 2008. Eventually the United Nations recognized their plight and started relocating the refugees to other countries. For more, I highly recommend the documentary movie, Refugees from Shangri-La, directed by Doria Bramante and Markus Weinfurter.

Through my photography project, I have been invited to many homes of NH’s Bhutanese families. I have photographed baby-naming ceremonies; hair-cutting traditions for young boys; religious ceremonies; high school, college and graduate school graduations; and several Hindu weddings.

These families continue to show me that while we may be different in many ways, we all have the same dreams to have safe homes, bright futures for our children, jobs that sustain our families, and freedom to practice our faith and cultural traditions. 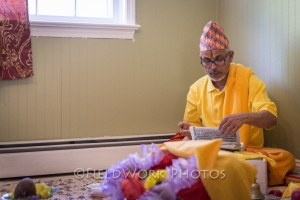 A Hindu priest reads a holy text during a Bhutanese house-blessing.